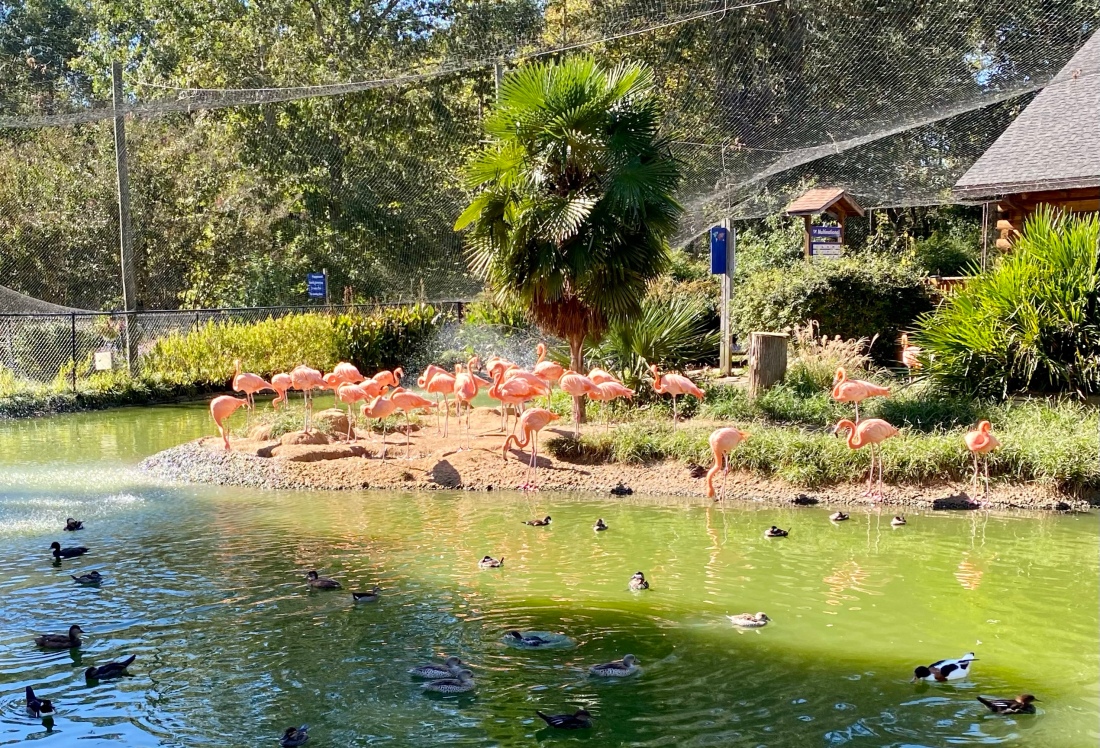 It was a pleasant surprise to find a bird park only 30 miles away. While it wasn’t the photo opportunity I was hoping for, it was a lovely park, with many birds and a fun Sculpture collection.

The Sylvan Heights Avian Breeding Center is home to over 170 species of birds–more than half of the known species of ducks, geese and swans–along with cranes, parrots and many other birds.

Founded in 1989 by internationally renowned aviculturalists Mike and Ali Lubbock, the avian breeding center cares for more than 2,500 individual birds, including over 1,000 hatchlings reared each year. Adjacent to the breeding center is Sylvan Heights Bird Park, which together form the world’s largest waterfowl collection and the second largest bird collection in the United States. The center is also the avicultural training site for conservation-oriented avian biologists. Every year, wildlife professionals from the nation’s zoos and nature centers come here to learn advanced techniques through the Sylvan Heights Avian Husbandry Program.

I love it when I find a local yarn store by accident. I was returning from an unproductive browse through a local flea market, and there I spotted Yarn Abilities! A great little shop with lots of great yarn. To my delight, the owner let me know there was a Fiber Festival this weekend a mere 30 minutes away! Be still my heart. 🥰

Harpers Ferry is a historic town situated at the confluence of the Potomac and Shenandoah rivers, where Maryland, Virginia, and West Virginia meet. During the Civil War it was the northernmost point of Confederate-controlled territory. It has been called “the best strategic point in the whole South.

What I found important in Harpers Ferry is that in 1859, abolitionist John Brown led 21 men down the road to Harpers Ferry. The plan was to take the town’s federal armory and, ultimately, ignite a nationwide uprising against slavery. The raid failed, but six years later, Brown’s dream was realized and slavery became illegal.

While wandering around I thought about the civil war. Over 150 years later, we seem to be fighting the same issues. How much longer will it take for real equality? I don’t understand what all the nostalgia is for the confederacy. I find it shameful.

On a lighter note, the Shenandoah valley is beautiful! I got to hike on the Appalachian Trail while crossing the bridge.

Today I decided to do a little Mead (aka Honey Wine) tasting. Less than a mile away: BRIMMING HORN MEADERY is a meadery with over 20 years of crafting and perfecting their award winning meads, and features a tasting/sampling area as well as a Scandinavian-style mead hall.

I set myself outside at their picnic table while tasted 10 different meads. It wasn’t long before my back started hurting. Fortunately, being a nomad, I always have a camp chair in my truck. I set it up, got comfy, and continued to enjoy my mead. 2 of them caught my attention so I went in to purchase them. They were sold in growlers that each required a $10 deposit. Unfortunately, being a nomad with a small trailer I wouldn’t be around to ever refill them, and had no good place to store them as souvenirs as suggested by the cashier. I walked away enjoying the experience, but not taking anything home with me.

Following the outbreak of World War II, this all-wood double wide aircraft hangar was assembled by the U.S. Navy in 1942 from a kit delivered via railroad. On April 1, 1943, Naval Air StationWildwood was commissioned as a training facility for dive bomber squadrons that would go on to fight in the Pacific. Between 1943 and 1945, activities included night flying and target practice over the Delaware Bay, reaching a peak of almost 17,000 takeoffs and landings in the month of October 1944. Before NAS Wildwood was decommissioned, 129 crashes occurred, and 42 airmen died in training exercises.

The NAS Wildwood Aviation Museum has a wide-ranging assortment of historic aircraft and artifacts that are on display for public enjoyment and education. For many, these iconic aircraft represent the bravery of both aviation pioneers and the first military pilots. Given that the museum is located inside a World War II hangar, it is appropriate that many of our propeller aircraft share a common history.

I was particularly intrigued by the Enigma Machine. How it works is both mind boggling and fascinating.

With only a few days to spend in Connecticut; the top item on my list was to visit the home of Samuel Langhorne Clemens, aka Mark Twain: the greatest humorist the United States has produced. I have long felt an affinity to his work. He would definitely be on my list of 5 people to bring back from the dead for dinner.

“The Vagabond Instinct was strong in me”. “All I do know or feel, is, that I am wild with impatience to move-move–Move! Curse the endless delays! I wish I never had to stop anywhere a month.”
-Letter from Samuel Clemens to his mother
and family, June 1, 1867

The Mark Twain House & Museum has restored the author’s Hartford, Connecticut, home, where the author and his family lived from 1874 to 1891. Twain wrote his most important works during the years he lived there, including Adventures of Huckleberry Finn, The Adventures of Tom Sawyer, and A Connecticut Yankee in King Arthur’s Court.

Fun Fact: Twain was born shortly after an appearance of Halley’s comet and he predicted that he would “go out with it” as well, dying the day after the comet made its closest approach to Earth.

In one beautiful trip on a ski lift, I got to take in the beauty of both the Mountain and the Lake named after Sunapee. Town, lake, and mountain share the name Sunapee, which comes from the Algonquin Indian words suna, meaning goose, and apee, meaning lake. The Indians called the area Goose Lake because it was a favorite spot of wild geese.

One of my favorite things to do when visiting any area is attending local craft fairs. The League of NH Craftsmen hosts one of the finest I have attended. I especially liked watching the crafts folk creating their art.

The League’s story begins in the mid-1920s when Mrs. Mary Coolidge and A. Cooper Ballentine joined forces to promote craft in New Hampshire. By 1932, The League of New Hampshire Arts and Crafts had been established, and the first official League shop was opened in Wolfeboro. The following year, the first Craftsmen’s Fair was held, making it the oldest craft fair in the country.

One of my favorite things to do when visiting any area is attending local craft fairs. The League of NH Craftsmen hosts one of the finest I have attended. I especially liked watching the crafts folk creating their art.

The League’s story begins in the mid-1920s when Mrs. Mary Coolidge and A. Cooper Ballentine joined forces to promote craft in New Hampshire. By 1932, The League of New Hampshire Arts and Crafts had been established, and the first official League shop was opened in Wolfeboro. The following year, the first Craftsmen’s Fair was held, making it the oldest craft fair in the country.

One of my favorite towns in New Hampshire is nestled between the northern White Mountains and the Connecticut River, the town of Littleton, NH, is equal parts business and shopping hub and outdoor escape. It’s been named one of the best places to live in America. It’s downtown has won big accolades as well; given Littleton’s lively arts scene, summertime festivals and street performers, local boutiques and shops . With its ideal location in the shadow of the mountains and along the river, Littleton prides itself on being a walkable community, both around town and on a 22-mile network of hand-built trails.